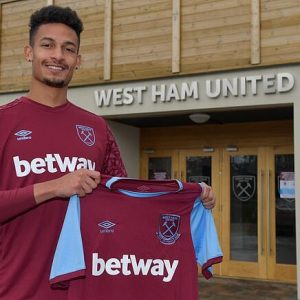 Frederik Alves Ibsen (born 8 November 1999) is a Danish professional footballer who plays as a centre back for West Ham United.

Alves’ mother is Brazilian, while his father is Danish. For this reason, Alves has dual citizenship although he was born and raised in Hvidovre, Denmark.

Due to Alves’ Brazilian background, he travelled to visit some family in Brazil. Alves played with his cousins and took part in a few training matches, before he was spotted by an agent, which he made a deal with. The agent then brought 15-year old Alves to Coritiba. Alves returned to Denmark after two years in Brazil and joined Silkeborg.

In the summer 2018, 19-year old Alves signed a one-year trainee-contract with Silkeborg which meant, that he was going to train with the first team but play with the U19’s. On 26 September 2018, Alves got his official debut for Silkeborg in a Danish Cup game against Næstved BK, where he was among the 11 starting players. On 1 November 2018, he signed a new deal until the end of 2020. Except for the following two games, Alves played all of the remaining games for Silkeborg and helped the team promoting to the Danish Superliga which also gained him a spot on the Danish U-20 national team. On 1 June 2019, Alves signed a new contract until the summer 2024.

On 4 November 2020, Silkeborg announced that they had sold Alves to an unnamed club, believed to be English Premier League club West Ham United. On 22 December 2020, West Ham announced the signing of Alves for an undisclosed fee, on a three-and-a-half year contract commencing on 2 January 2021.