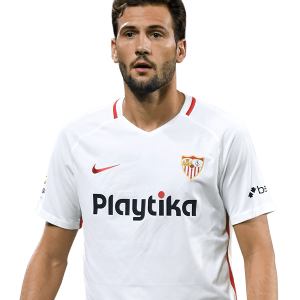 Franco Damián Vázquez (born 22 February 1989) is a professional footballer who plays as an attacking midfielder for Spanish club Sevilla and the Argentina national team.

Beginning his career with Argentine club Belgrano in 2007, Vázquez moved to Italian side Palermo in 2011. After a brief loan spell in Spain with Rayo Vallecano during the 2012–13 season, he made his breakthrough with the Sicilian club, earning a transfer to La Liga side Sevilla in 2016.

Vázquez holds both Argentine and Italian nationality as his mother was born in Italy. Internationally, he played for Italy in two friendly matches in 2015, but later declared his intention to represent his birth nation; he debuted for Argentina in 2018.

Sevilla
On 16 July 2016, Vázquez returned to Spain’s top flight, joining Sevilla[12] for a reported €15 million transfer fee. On 9 August, in his first official appearance for his new club, he scored in a 3–2 extra-time defeat to Real Madrid in the 2016 UEFA Super Cup. On 20 August, he scored and assisted on his La Liga debut in a 6–4 home victory over Espanyol.