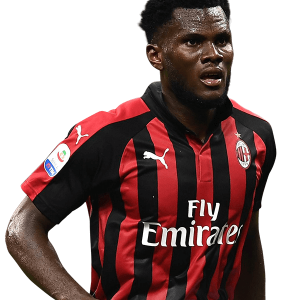 Franck Yannick Kessié (born 19 December 1996) is an Ivorian professional footballer who plays as a central midfielder for Italian club Milan and the Ivory Coast national team.

On 2 June 2017, Kessié joined fellow Serie A side Milan on a two-year loan deal with the obligation to buy. Originally, he chose 19 as his shirt number but soon was persuaded by the club’s management to leave it for Leonardo Bonucci, who transferred to Milan a few weeks later; as a result, Kessié changed it to 79. Following Bonucci’s departure in the next summer transfer window, he was offered his original shirt number back yet refused, citing that he does not want to force A.C. Milan fans to spend any extra money on his personalized shirts due to yet another number change.

He made his debut for Milan and helped the club to win the first leg of Europa League qualification match against CS U Craiova on 27 July. On 20 August 2017, in Milan’s opening Serie A match of the season, he scored a penalty in a 3–0 victory over Crotone. In a match on 21 January 2018, Kessié scored two goals, one being from the penalty spot, to give Milan the win. On 12 July 2020, he scored a penalty for a final 2–2 score against S.S.C. Napoli. The 23-year-old Ivorian scored 4 goals and 3 assists in the first 10 matches in Serie A 2020-21 season.