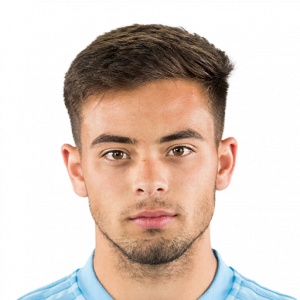 Rayo Vallecano
Beltrán joined Rayo Vallecano’s youth setup in 2013, from Getafe CF. He made his senior debut with the former’s reserves on 13 December 2015 at the age of just 16, starting in a 1–1 Tercera División home draw against CD San Fernando de Henares.

Beltrán was an ever-present starter with the first team during the 2016 pre-season, being the most utilized player by manager José Ramón Sandoval. He made his professional debut on 20 August, playing the full 90 minutes in a 2–1 away loss against Elche CF for the Segunda División championship.

Beltrán scored his first professional goal on 29 October 2016, netting his team’s first in a 3–2 loss at CD Tenerife. An undisputed starter during the 2017–18 season, he contributed with 40 appearances as his side returned to La Liga as champions.

Celta
On 1 August 2018, Beltrán signed a five-year contract with Celta de Vigo in the main category, for a reported fee of € 8 million. He made his debut in the main category on 18 August, starting in a 1–1 home draw against RCD Espanyol, and on 7 January 2019 he scored his first such goal to equalise in a 2–1 defeat to Athletic Bilbao also at Balaídos.

Beltrán was sent off in the 25th minute of a 2–0 home loss to Granada CF on 15 September 2019 for a foul on Yangel Herrera that was confirmed by video assistant referee review; teammate Jorge Sáenz had already been sent off through the same technology.