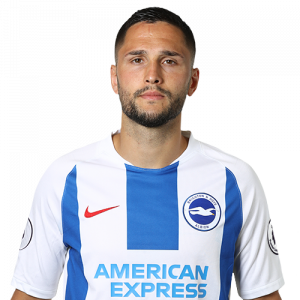 Raised in Spain, he began playing in the country’s lower divisions before making his professional debut for Córdoba at the age of 21. In 2016, he joined Deportivo La Coruña, and two years later he signed for Brighton & Hove Albion in England.

Andone earned his first full cap for Romania in June 2015 and was selected for UEFA Euro 2016.

On 25 May 2018, Andone signed a five-year deal with Brighton & Hove Albion for an undisclosed fee, and joined the Premier League side when the international transfer window opened on 8 June. The rumoured transfer fee was €6 million, representing the release clause in his contract in case of Deportivo La Coruña’s relegation.

Andone scored for Brighton in his fourth appearance—and also his first start—away against Huddersfield Town to flip the game from 1–0 down to 2–1 up, and netted again in the next match at the Falmer Stadium against rivals Crystal Palace, collecting the ball just inside the Palace half, dribbling into the area and scoring from an acute angle.

On 5 January 2019, Andone scored on his FA Cup debut in a 3–1 away win against Bournemouth, and a month later he scored in a fourth round replay win against West Bromwich Albion.[40] Before his goal, he elbowed opponent Sam Field’s face without the officials seeing; he was later fined and banned for three matches.

On 24 August 2019, Andone was sent off in a Premier League match against Southampton, following a rash knee-high challenge on Yan Valery. Brighton manager Graham Potter described the tackle as “one we can’t defend”, and Paul Merson, speaking on Soccer Saturday, described it as worth “five red cards” and “one of the worst tackles you will ever see”.