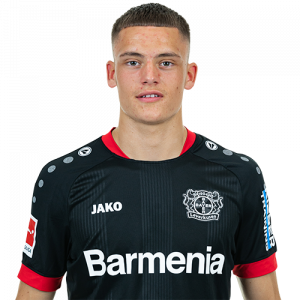 Florian Richard Wirtz (born 3 May 2003) is a German footballer who plays as an attacking midfielder for Bundesliga club Bayer Leverkusen.

Regarded as a big upcoming talent in German football, Wirtz joined the youth team of 1. FC Köln in 2010, where he remained until he was signed by Bayer Leverkusen in January 2020. After impressing for the under-17 team, Wirtz made his senior professional debut for Leverkusen in the Bundesliga on 18 May 2020, starting in an away match against Werder Bremen. In doing so, he overtook Kai Havertz as Leverkusen’s youngest player to debut in the league, at the age of 17 years and 15 days.

On 6 June 2020, Wirtz scored his first goal for Leverkusen in the 89th minute of their 2–4 home loss against Bayern Munich. This made Wirtz the youngest goalscorer in Bundesliga history at the age of 17 years and 34 days. However, this record would later be surpassed following Youssoufa Moukoko’s goal less than a year later (aged 16 years and 28 days).

Wirtz signed a contract extension with the club on 23 December 2020, extending his deal until 2023. On 19 January 2021, he scored the winner in the 80th minute of Leverkusen’s 2–1 home victory over Borussia Dortmund. Wirtz scored his fifth career Bundesliga goal in a 5–2 win against VfB Stuttgart on 6 February, becoming the first player in league history to reach this benchmark before turning eighteen years old.