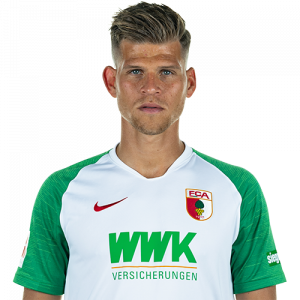 Florian Niederlechner (born 24 October 1990) is a German professional footballer who plays as a forward for FC Augsburg.
Niederlechner’s career is considered atypical since he became a Bundesliga player without passing through the youth ranks of a professional club. At the age of twelve, after a single year with the club, he was forced to leave the under-13 team of 1860 Munich being deemed too small and too slow. He moved to the local Kreisliga club TSV Ebersberg, starting playing senior football for Landesliga side FC Falke Markt Schwaben in 2008. At the time he completed his vocational training as industrial management assistant.

In 2010, he joined fifth tier Bayernliga side FC Ismaning. There he created a stir by scoring 19 goals in the 2010–11 season, eventually receiving and accepting an offer from 3. Liga’s SpVgg Unterhaching, which was forced to bet on young talents due to its financial difficulties. For Unterhaching, Niederlechner continued to be a successful striker, scoring eight goals in the 2011–12 season and another eight in the first leg of the next campaign. During the winter break 2012–13, he made the next move, this time to ambitious fellow 3. Liga side 1. FC Heidenheim, with whom he achieved promotion to the 2. Bundesliga in 2014. After 15 goals and ten assists in 33 league matches, and Heidenheim finishing 8th after promotion to 2. Bundesliga, he finally made the step to the Bundesliga, joining Mainz 05. This move was reportedly worth a transfer fee of €2 million.

On 29 May 2019, FC Augsburg announced that Niederlechner would join the club from the upcoming season. He penned a three-year contract.