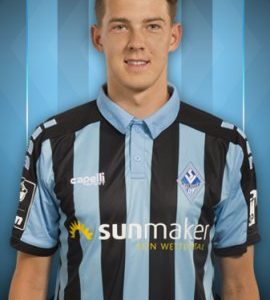 Florian Flick (born 1 May 2000) is a German professional footballer who plays for Bundesliga club Schalke 04.

Flick has been trained as a central defender in the youth department of SV Waldhof Mannheim since 2015.  In August 2018 he signed a contract for the club’s first team, which runs until June 30, 2020.

On September 23, 2019, he made his professional debut in the 3rd division at the game between SV Waldhof and KFC Uerdingen. On June 14, 2020, Flick scored his first professional goal in the 74th minute of the game against the second team of FC Bayern Munich.

For the 2020/21 season he signed a contract for the second team of FC Schalke 04, which runs until June 30, 2022.  In the regional league team, Flick immediately established himself as a regular player. After 23 appearances (all from the start) in which he scored a goal, the new head coach of the professional team, Dimitrios Grammozis, nominated him for the matchday squad of a Bundesliga match at the beginning of March 2021.