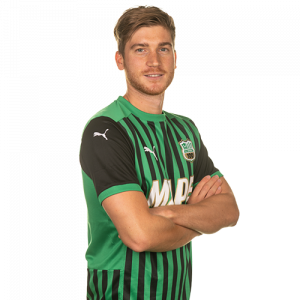 Filippo Romagna (born 26 May 1997) is an Italian professional footballer who plays as centre-back for Italian Serie A club Sassuolo.

Early career
Born in 1997, Romagna started his football career with the local team in his hometown, Fano. At the age of 10, Romagna moved to Rimini. In 2011, Internazionale tried to sign with Romagna but he eventually joined Juventus F.C. Youth Sector. During his stay within Juventus academy, he became also captain of the Under-19 team, which plays in Campionato Nazionale Primavera.

Juventus
Loan to Novara and Brescia
On 29 August 2016, he was loaned to Serie B club Novara until the end of 2016–17 season. On 22 October, he made his professional and league debut against at Stadio Silvio Piola, replacing Gianluca Sansone in the 79th minute of a 1–0 home win over Avellino. On 29 November. Romagna played in the fourth round of Coppa Italia in a 3–0 away defeat against ChievoVerona, he played the full match. Romangna ended his loan with only 5 appearances. In January he was recall to the first team.

In January 2017 he was sent on loan to Serie B club Brescia, in order to find more playing time. He made his debut with Brescia on 24 February 2017, in the league match won 4–1 against Cittadella. Romagna ended his 6-month loan to Brescia with 14 appearances, all as a starter.

Cagliari
On 28 July 2017, Cagliari confirmed the signing of Romagna on a five-year contract. On 17 September he made his debut for Cagliari in Serie A as a substitute, replacing Joao Pedro in the 91st minute of 2–0 away win over SPAL.