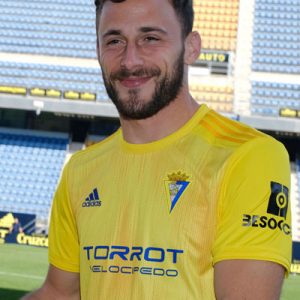 Filip Malbašić (born 18 November 1992) is a Serbian professional footballer who plays as a winger for Spanish club Cádiz.

Malbašić started out at Radnički Beograd. He was promoted to the senior squad during the 2008–09 Serbian League Belgrade, as the club suffered relegation at the end of the season. In the summer of 2010, Malbašić moved to Rad, making his Serbian SuperLiga debut later that year, four days shy of his 18th birthday. He scored his first goal for Rad in a 1–4 home league loss to Partizan in March 2012.

In July 2012, Malbašić was transferred to German side 1899 Hoffenheim. He was unable to make any appearance in his debut season at the club. After failing to earn his place in the squad, Malbašić completed a season-long loan move to Partizan in June 2013. He was subsequently loaned to Polish club Lechia Gdańsk in August 2014.

Six months before the expiration of his contract with 1899 Hoffenheim, Malbašić was transferred to Vojvodina, penning a two-and-a-half-year deal on 21 January 2016. He scored once in the league from 14 appearances until the end of the 2015–16 campaign. In the next 2016–17 season, Malbašić was the league’s third-highest scorer with 16 goals, being selected in the competition’s best eleven.

On 22 August 2017, Malbašić was transferred to Spanish club Tenerife on a four-year contract. On 30 January 2020, he was loaned to fellow Segunda División side Cádiz for six months, signing permanently until 2023 with the latter side on 22 July, after achieving promotion.