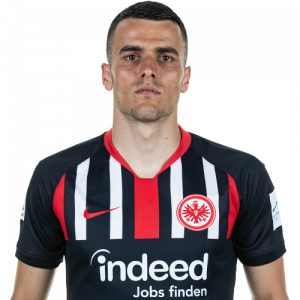 Filip Kostić (born 1 November 1992) is a Serbian professional footballer who most frequently plays on the left wing for German club Eintracht Frankfurt and the Serbia national team.

Kostić made his senior debut with Radnički Kragujevac in 2010 at the age of 17. This was after the club was promoted to the Serbian SuperLiga from the Serbian First League. He began attracting the interest of several clubs including Red Star Belgrade, Anderlecht, Udinese, and Tottenham Hotspur. On 15 April 2012, he was named starting left winger in Sportal’s ideal team of round 24 in the SuperLiga.

On 4 April 2012, he signed a contract with Eredivisie side Groningen and moved to the Netherlands in June 2012 after the end of the season. He made his debut for Groningen on 21 October 2012. After getting little playing time, Kostić finally began showing promising potential from the beginning of the 2013–14 Eredivisie; he attracted media attention after playing a brilliant game in which he had one assist against NEC, and then on 25 August he added to his reputation of play-making by assisting twice against Go Ahead Eagles. Finally, on 20 October 2013, Kostić scored his first ever goal for Groningen in a 1–0 win against PSV Eindhoven. Kostić received criticism for a media interview after drawing 0–0 with Aberdeen F.C. in the second round of the Europa League qualifiers. He went on record after the match saying, “We go home happy, we have done 80% of what we need to go through”. Groningen went on to lose the tie with the Scottish club 1–2 at the Euroborg. Aberdeen winger Johnny Hayes was later quoted as saying “I was quite happy ramming their words down their throats”.

On 9 August 2014 Filip Kostić moved to German side VfB Stuttgart for €6 million and a possible bonus of €1 million. Groningen also would get 15% of a future transfer fee received by Stuttgart. Kostić signed a contract until June 2019 with VfB Stuttgart.

After the relegation of VfB Stuttgart at the end of the season 2015–16, Kostić was transferred to Hamburger SV for a fee of €14 million, making him the most expensive player in the history of the club. On 20 August 2018, Kostić joined Eintracht Frankfurt on loan until the end of 2018–19 season. On 17 May 2019, Frankfurt announced the permanent signing of Kostić on a permanent deal until 2023.