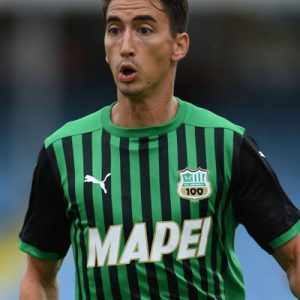 Filip Đuričić (born 30 January 1992) is a Serbian professional footballer who plays as an attacking midfielder for Italian club Sassuolo and the Serbia national team.

Early career
Đuričić began playing football at local side Obrenovac 1905, before joining Red Star Belgrade’s youth system. In 2007, he moved abroad to Greece and spent a year with Olympiacos. After Olympiacos, he played senior football at his hometown club Radnički Obrenovac, before joining SC Heerenveen in January 2010. He made his debut for them on 20 February against RKC Waalwijk and made an assist.

Benfica
On 23 February 2013, it was confirmed that Đuričić, along with fellow national team player Miralem Sulejmani, had passed medical tests and committed to a five-year contract with Benfica from summer 2013; with the Portuguese club spending €6 million to secure his services. A week later, Benfica revealed that the contract which Đuričić had signed contained a release clause which valued him at €40 million. Đuričić made his debut for Benfica on 18 August 2013, where he scored his first goal against Anderlecht in the UEFA Champions League.

Loans
Used sparsely throughout the season, Đuričić was loaned to 1. FSV Mainz 05 (Mainz) for one season on 23 July 2014, with the option to make the move permanent for €12.5 million. He made his debut at Mainz on 15 August 2014 in a DFB-Pokal match against Chemnitzer FC. On 2 February 2015, Đuričić was loaned to Premier League side Southampton until the end of the season. On 25 January 2016, he joined Belgian club Anderlecht on loan until June.

Sampdoria
After initially joining U.C. Sampdoria on loan until the end of the 2016–17 season in summer 2016, Đuričić signed permanently in January 2017. His contract with Sampdoria expired in the summer of 2018.

Sassuolo
In late June 2018, Đuričić signed a four-year contract with U.S. Sassuolo Calcio. In October 2019, his form improved under coach Roberto De Zerbi, scoring a goal in a 3–4 loss to Inter Milan on 20 October 2019 and another one five days later in a 1–0 win against Hellas Verona.