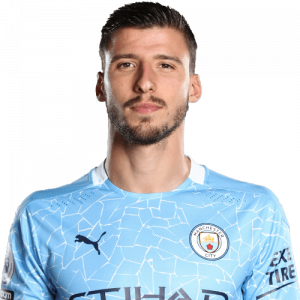 Ferran Torres García (born 29 February 2000) is a Spanish professional footballer who plays as a winger for Premier League club Manchester City and the Spain national team. He has represented Spain internationally at various youth levels and debuted for the senior team in 2020.

On 4 August 2020, English club Manchester City confirmed the signing of Torres on a five-year contract, until 2025, for a reported transfer fee of €23 million (£20.8 million). The club later revealed that Torres had inherited the shirt number 21 previously worn by City legend David Silva, a fellow Spanish player who also arrived from Valencia. Torres made his debut in City’s first game of the season, coming on as a substitute and winning 3–1 against Wolverhampton Wanderers away from home in the Premier League. On 30 September 2020, Torres scored his first goal for the club, in a 3–0 away win over Burnley in the EFL Cup.

On 21 October 2020, he made his UEFA Champions League debut with Manchester City, scoring a goal in a 3–1 win against Porto. Just a week later, Torres started and scored again in the Champions League in a 0–3 victory over Olympique de Marseille. This meant that he became the youngest Spanish player ever to score in three consecutive appearances in the Champions League, at 20 years and 241 days old. On 28 November, Torres scored his first league goal for City in a 5–0 home win over Burnley. On 23 January 2021, Torres scored his first FA Cup goal in a 3–1 away win over League Two side Cheltenham Town in the fourth round.

Regarded as a talented and highly promising young attacking winger in the media, Torres has been described as a traditional wide midfielder, due to his work-rate and penchant for running to the touchline, although he is also capable of cutting inside towards the centre of the pitch; due to his role, nationality, and playing style, Simone Lorini has likened him to Joaquín. Torres is known in particular for his pace, creativity, technique, and his close control at speed, which enables him to take on opponents and overload the flanks, while his height, athleticism, and heading ability also make him a strong aerial presence. Although he primarily plays on the right, he is capable of playing anywhere across the attacking line. In 2018, Spanish football journalist Guillem Balagué noted that Torres “is a dribbler, fast on the wing, can play on either wing, and he has got ability and intelligence. He can also play inside if needed, so he is a modern winger.” The Valencia academy director of recruitment, José Giménez, instead stated: “He’s powerful, quick, steady with the ball at his feet and strong in the air. He’s unpredictable. When he’s running with the ball at his feet he can go on inside or outside his man because he is two-footed. He can cross, finish and shoot the football.”