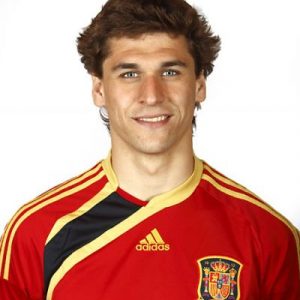 He started his career with Athletic Bilbao, working his way through the various youth ranks and, after making his first team debut in 2005, becoming one of the most important offensive players for the club in the following decade. He scored 29 goals in all competitions in the 2011–12 season, and was described as a “Bilbao legend”. He signed with Juventus in 2013, and won the Serie A title twice during his two-year spell there. Subsequently, he spent 2015–16 back in Spain with Sevilla before moving to Swansea City in 2016, and Tottenham Hotspur in 2017.

A Spain international since late 2008, Llorente was a member of the squads which won the 2010 World Cup and Euro 2012.

Llorente spent several seasons in the various junior levels of the club, playing alongside Fernando Amorebieta and moving to their farm team Basconia in Tercera División in 2003. He gradually improved, leading to promotion to Bilbao Athletic – Athletic’s reserves – in Segunda División B.
On 3 January 2013, Athletic confirmed that Llorente would be holding talks with Juventus. On the 21st the Italians’ sporting director, Giuseppe Marotta, stated that he was “very optimistic” that the player would join on 1 July, with Urrutia believed to be unwilling to allow him to leave in the January transfer window. Three days later the club formalized the signing, and announced he would sign a four-year contract on 1 July when his contract with Bilbao expired; Juventus also paid his agent €3.038 million.

Llorente officially became a Juventus player on 1 July 2013 after passing a medical at the club. He was given the number 14 shirt, and scored his first goal in Serie A on 22 September when he started in a 2–1 home win against Hellas Verona.

Sevilla
On 27 August 2015, free agent Llorente signed a three-year contract with Sevilla with a buyout clause of €20 million. He made his league debut three days later, playing the full 90 minutes in a 0–3 home defeat against Atlético Madrid. He scored his first goal for the club in a 2–1 loss to Celta, also at the Ramón Sánchez Pizjuán Stadium, on 20 September.

Swansea City
On 4 August 2016, it was announced that Llorente had signed a two-year deal with Swansea City. He made his Premier League debut nine days later, playing the full ninety minutes in a 1–0 away win against Burnley.

Tottenham Hotspur
On 31 August 2017, Llorente joined Tottenham Hotspur on a two-year deal for a reported fee of £12.1 million. He made his debut for the club on 13 September, replacing Harry Kane for the last minutes of a 3–1 home win over Borussia Dortmund in the Champions League group stage. He made his first start in the EFL Cup tie against Barnsley on 20 September, then played in the Champions League group stage match at Real Madrid which ended 1–1.

Napoli
On 2 September 2019, Llorente joined Napoli on a free transfer, returning to Italy four years after leaving Juventus. He made his league debut against Sampdoria on 14 September, where he provided an assist for Dries Mertens within minutes of coming on as a substitute to help the team win 2–0. His first goal for the club came three days later in the Champions League group stage game against Liverpool, scoring in injury time to seal a 2–0 victory.

On 27 January 2021, Llorente signed a one-and-a-half-year contract with Udinese.