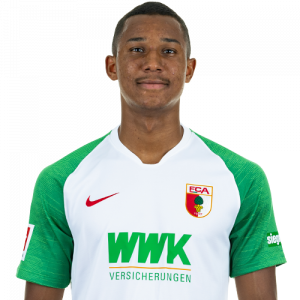 Ohis Felix Uduokhai (born 9 September 1997) is a German footballer who plays as a defender for FC Augsburg.

Uduokhai was born to a Nigerian father and German mother, and is a Germany youth international. In June 2017, after his previous team 1860 Munich had been relegated from 2. Bundesliga to fourth tier Regionalliga Bayern, Uduokhai moved to Bundesliga side VfL Wolfsburg, signing a five-year-contract until 2022.

On 28 August 2019, it was announced that Uduokhai will be on loan to FC Augsburg until the end of the season.

On 4 June 2020, FC Augsburg confirmed they would use the option to buy in Uduokhai’s loan deal. He completed a permanent transfer to the club for a fee of 9 million euros.