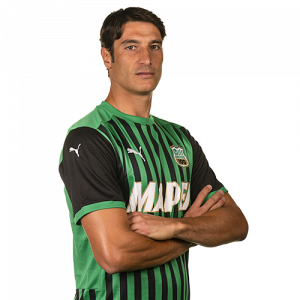 Federico Peluso (born 20 January 1984) is an Italian professional footballer who plays as a left back for Serie A club Sassuolo.

He has also played for the Italian national team.

Peluso began his career on ASD Petriana, in Rome. He later moved to Lazio, but was subsequently released.

In 2001, he joined Pro Vercelli, where he played three full seasons. In 2004 summer he joined Ternana, and after two years in the club, he was bought from AlbinoLeffe, being promoted with the Bergamo club.

However, in his second season, he had a fallout with the club’s ownership, and was removed from squad. In January 2009, Peluso joined Atalanta, as an exchange for Karamoko Cissé.

On 8 March 2009, Peluso made his Serie A debut, playing against A.C. Milan. On 25 October, he made his first top flight goal, against Parma.

On 3 January 2013, Peluso joined Juventus on a six-month loan, with a view to a permanent transfer after the period. He spent the second half of the 2012–13 campaign on loan with the Bianconeri, and his performances earned him a permanent transfer and a contract until June 2017, as Juventus captured the league title. In June 2013, Juventus announced that they had completed the signing of Federico Peluso from Atalanta for a transfer fee of €4.8 million. After the end of the 2013–14 season, Serie A side Sassuolo announced that they acquired Peluso outright, as part of the deal that brought Luca Marrone back to Juventus.