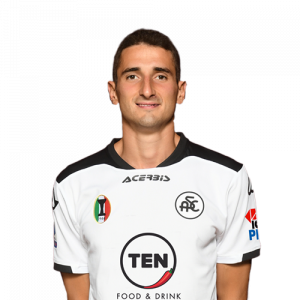 Federico Mattiello (born 14 July 1995) is an Italian professional footballer who plays as a defender for Spezia, on loan from Atalanta.

Juventus
Born in Lucca, Mattiello joined the Juventus youth system as a 13-year-old after impressing in the youth squads of Lucchese, where he had played for four seasons; he had previously also played for Valdottavo. He was also a talented junior tennis player at the time, but chose to concentrate on football instead. He won the Coppa Italia and Supercoppa with the Juventus Primavera side in 2013.

On 9 November 2014, Mattiello made his debut for the first team, coming on as a late second-half substitute for fellow youth product Claudio Marchisio in the 7–0 thrashing of Parma. He was sent to Chievo Verona on loan in February 2015 to gain more playing time, but his loan spell was cut short when Radja Nainggolan broke his leg in the club’s game against Roma on 8 March, and he was ruled out for the rest of the season. On 3 July 2015, an agreement was reached between Juventus and Chievo, that would see Mattiello’s loan with the latter club renewed for the following season. He returned to action on 19 October, starting in a 3–2 home loss to Genoa. Three days later, however, he suffered another serious injury in training. In July 2017, Mattiello was loaned out to S.P.A.L. for the 2017–18 season.