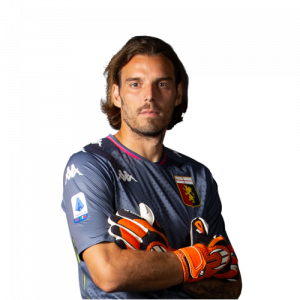 Federico Marchetti (born 7 February 1983) is an Italian professional footballer who plays as a goalkeeper for Genoa and the Italy national team.

Marchetti began his professional club career with Torino in 2002, and was subsequently loaned out to Pro Vercelli, Crotone, and Treviso. In 2005, he spent a season with Biellese, and later played for AlbinoLeffe and Cagliari, before moving to Lazio in 2011, where he won the Coppa Italia in 2013. At international level, he has represented Italy at the 2010 FIFA World Cup, at the 2013 FIFA Confederations Cup (winning a bronze medal), and at UEFA Euro 2016.

Early career
A Torino youth system trainee, Marchetti made his professional debut on loan to Pro Vercelli, being then loaned to a number of other Serie C1 and Serie C2 teams in the following years: he spent the 2003–04 season as second choice keeper with Crotone and later Treviso, without making a single appearance with any of these teams.

AlbinoLeffe
In mid-2005, Torino which originally promoted to Serie A, went bankrupt and a new team started again in Serie B as successor, and all of the old Torino players were allowed to leave for free. He was signed by AlbinoLeffe and left for Biellese in co-ownership deal.

Cagliari
In July 2008, Cagliari agreed a loan bid with AlbinoLeffe for the goalkeeper, with Cagliari having an option to buy 50% of players’ rights to an agreed price.

In his first season in the Serie A, Marchetti confirmed his performances, firmly ensuring a place in the starting lineup, his performances being praised by several football pundits, being also defined by Gianluigi Buffon as his favourite Italian young goalkeeper. On 1 February 2010, Cagliari bought the remain rights from AlbinoLeffe.

Genoa
Marchetti was acquired by Genoa on 2 July 2018 on a free transfer after his contract expired with Lazio.