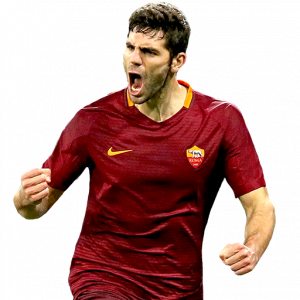 He began his career at Ferro Carril Oeste, signing for Sevilla in 2007. He made 201 official appearances for the latter club in nine years and scored 15 goals, joining Tottenham Hotspur in August 2014 and subsequently returning to Sevilla on loan; in August 2016, he moved to the Italian Serie A with Roma.

Fazio made his debut for Argentina in 2011, and represented the country at the 2018 World Cup.

Roma
On 3 August 2016, Fazio was loaned to A.S. Roma, with the Italians having the possibility of buying outright at the end of the campaign for €3.2 million. He made his Serie A debut 17 days later, playing ten minutes in a 4–0 home win against Udinese Calcio. A permanent deal was agreed on 15 July 2017.