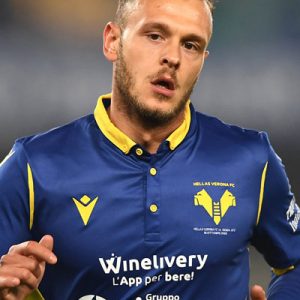 Federico Dimarco (born 10 November 1997) is an Italian professional footballer who plays as a full-back for Hellas Verona on loan from Inter Milan.

Inter Milan
A product of Inter Milan’s youth academy, Dimarco made his debut for the club on 11 December 2014, aged 17, when he came on as a substitute for Danilo D’Ambrosio after 84 minutes in a goalless draw away to Qarabağ in the group stage of the UEFA Europa League, with his team having already advanced. He was called up for a Serie A match for the first time on 1 February 2015, remaining an unused substitute in a 1–3 defeat away to Sassuolo. Dimarco made his debut in Serie A on 31 May 2015, in the last match of the season in what would be a 4–3 win over Empoli, coming on in place of Rodrigo Palacio in the 89th minute of the game.

Loan to Ascoli
In January 2016 he was sent on loan to Serie B club Ascoli with a 6-month loan deal. On 6 February, Dimarco made his debut for Ascoli in Serie B in a 0-0 home draw against Latina, he was replaced by Dario Del Fabro in the 81st minute. Dimarco finish his 6-month loan to Ascoli with 15 appearances and 4 assists.

Loan to Empoli
He was sent on loan to Serie A club Empoli with a season-long loan deal. On 28 August 2016 he made his debut for Empoli in Serie A in a 2-0 away defeat against Udinese, he was replaced by Marco Zambelli in the 69th minute. On 29 November, Dimarco in the fourth round of the Coppa Italia in a match loss 2-1 in the extra time against Cesena. He finish his season-long loan to Empoli with 13 appearances, but Empoli was relegated in Serie B.

Return to Inter and loan to Parma
On 5 July 2018, Inter exercised their buy-back clause to bring back Dimarco for €7 million.

On 7 August 2018, Dimarco was loaned to Parma with an option to buy. He made his debut for Parma on 12 August in the third round of Coppa Italia, a 1–0 loss to Pisa. On 16 September, he scored his first goal in Serie A in a 1–0 win against Inter at San Siro.

On 31 January 2020, Dimarco moved to Hellas Verona on loan until the end of the season with an option for a permanent move. On 9 September 2020, his loan was extended for another season.