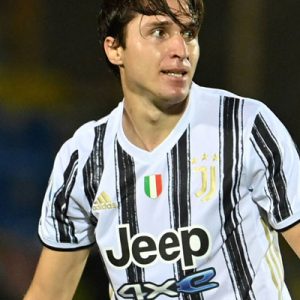 Federico Chiesa (born 25 October 1997) is an Italian professional footballer who plays for Serie A club Juventus, on loan from Fiorentina, and the Italy national team.

He primarily plays as a winger, but can also be deployed as a forward. He is the son of former footballer Enrico Chiesa.

On 5 October 2020, Chiesa signed a two-year loan deal with Juventus; a €3 million loan for the first season and a €7 million loan for the second season, with a conditional obligation to buy for €40 million plus €10 million in variables. On 17 October, Chiesa made his debut for Juventus, providing an assist for Álvaro Morata and getting a straight red card in a 1–1 away draw to Crotone. He made his UEFA Champions League debut three days later, in a 2–0 away win over Dynamo Kyiv. He scored his first goal in the competition, and for Juventus, on 2 December, in a 3–0 home win against the same opponent.

Chiesa’s first league goal for Juventus came on 16 December, scoring a long-distance goal in a 1–1 home draw against Atalanta. On 6 January 2021, Chiesa scored a brace against league-leaders Milan to help Juventus win 3–1 away from home; it was Milan’s first league defeat in 27 games. Chiesa scored three goals against Porto in the 2020–21 UEFA Champions League round of 16: one in the first leg and two in the second leg. However, Juventus were eliminated on away goals rule.