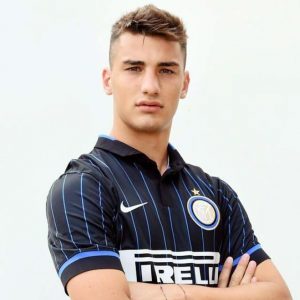 Federico Bonazzoli (born 21 May 1997) is an Italian professional footballer who plays as a striker for Serie A club Torino, on loan from Sampdoria.

Internazionale
Bonazzoli arrived at Inter at the age of seven. On 18 May 2014, Bonazzoli made his senior debut against Chievo Verona as a substitute for Rubén Botta in the 85th minute of a 1–2 away defeat on the last day of the Serie A season. He became the second youngest footballer to play in Serie A for Inter aged 16 years, 11 months and 27 days, 17 days older than Massimo Pellegrini, who debuted in 1982. On 6 November 2014 he made his UEFA Europa League debut in a 1–1 away draw against Saint-Étienne in the group stage, he was replaced by Joel Obi in the 66th minute.

Sampdoria
On 2 February 2015, he signed for fellow league team Sampdoria for €4.5 million, but would remain at Inter on loan until the end of the season.

On 21 January 2016, he was signed by Serie B club Lanciano on a season-long loan deal, with an option to purchase. On 22 July, he joined Brescia on loan.