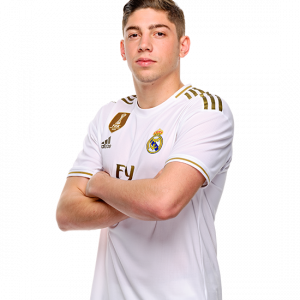 With the return of Zinedine Zidane to the dugout and the departure of Marcos Llorente, Valverde broke through the team to become a key player of the squad during the 2019–20 season. On 9 November 2019, he scored his first goal for Real Madrid, in a 4–0 away win over Eibar in La Liga.

On 12 January 2020, Valverde tackled Álvaro Morata during the Supercopa de España Final against Atlético Madrid, committing a professional foul and stopping play with Morata clean through on goal. Valverde was sent off, but his actions stopped what was an inevitable goal, forced a penalty shootout which Real Madrid won, and earned him the Man of The Match award and widespread praise. Atlético Madrid manager Diego Simeone later referred to the tackle as “the most important play of the game”. He made 33 appearances during the league season, as Real Madrid won the 2019–20 La Liga.

On 27 September, Valverde scored Real Madrid’s first goal of the 2020–21 season away to Betis in La Liga in an eventual 3–2 win and was selected as the ‘King of The Match’. This was also his 50th La Liga match for Los Blancos. One month later on 24 October, Valverde scored against FC Barcelona at the Camp Nou in just five minutes in an eventual 3–1 league win. Valverde became just the second Uruguayan to score in El Clásico (after Luis Suárez) and the first for Real Madrid. One week later Valderde scored again, against Huesca in a 4–1 league win at the Alfredo Di Stéfano Stadium. This was his third goal of the season, meaning he had already scored more this season than the entirety of the previous campaign.