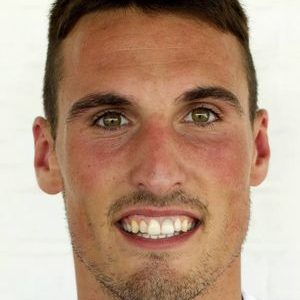 Racing
Born in Sierra de Ibio, Mazcuerras, Cantabria, San Emeterio joined Racing de Santander’s youth academy in 2007, aged 10. On 14 January 2014, before even having appeared with the reserves, he made his senior debut, coming on as a late substitute in a 2–0 away win against UD Almería for the season’s Copa del Rey.

San Emeterio first appeared in Segunda División B on 10 May, again from the bench in a 1–1 away draw to Coruxo FC. On 24 August he played his first match as a professional, replacing Javi Soria in the 64th minute of a 0–1 away loss against Girona FC for the Segunda División.

San Emeterio contributed 35 appearances during the campaign, as his team suffered relegation. He scored his first senior goal on 4 October 2015, in a 2–0 victory at Sporting de Gijón B.

Sevilla
On 16 August 2016, both San Emeterio and his brother moved to another reserve team, signing a three-year contract with Sevilla Atlético in the second level. He netted three times from 39 games (all starts) in his second year, which ended in relegation after the last-place finish.

Valladolid
On 16 August 2018, San Emeterio joined Real Valladolid on a three-year deal, being immediately loaned to Granada CF in the second division. He made his La Liga debut while at the service of the former club, starting the 1–1 away draw against Real Madrid on 24 August 2019.