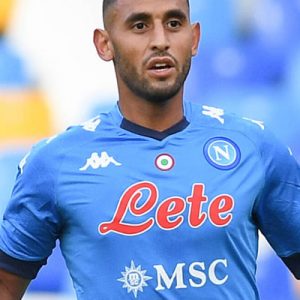 Faouzi Ghoulam (born 1 February 1991) is a professional footballer who plays as a left back for Serie A club Napoli and the Algerian national team.

Early life
Ghoulam was born in Saint-Priest-en-Jarez to Algerian parents. His father is from Batna, while his mother is from Annaba. He has eight brothers and two sisters, and his brother Nabil is a cross country runner that represented France at the 2004 IAAF World Cross Country Championships.

Club career
On 22 September 2010, Ghoulam made his professional debut for AS Saint-Étienne coming as a substitute in the 82nd minute of a Coupe de la Ligue match against Nice. He made his Ligue 1 debut in a round 13 clash against Valenciennes and went on to make another 11 appearances in his breakout season with Saint-Etienne, becoming a consistent starter by the end of the season. Over the next two and a half seasons, he made another 65 league appearances.

In the winter of 2014, Ghoulam moved to S.S.C. Napoli. He became an immediate starter at Napoli under Rafael Benítez and helped the side finish in third place in Serie A during the 2013–14 season, also capturing the Coppa Italia.

In November 2017, Ghoulam suffered an anterior cruciate ligament rupture in a Champions League group-stage fixture against Manchester City, and was expected to be ruled out for at least two months; in January 2018, however, he underwent medical tests and resumed training ahead of schedule.