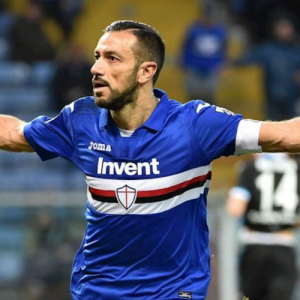 Fabio Quagliarella (born 31 January 1983) is an Italian professional footballer who plays as a forward for Serie A team Sampdoria, whom he captains, and the Italy national team.

Throughout his career, he has played for eight different Italian clubs, winning three consecutive Serie A titles from the 2011–2012 to 2013–14 season with Juventus. With the Turin-based club he also won two Supercoppa Italiana in 2012 and 2013. He also won the 2002–03 Serie C2 with Fiorentina. In the Serie A he also represented Torino, Ascoli, Udinese and Napoli.

At international level, he represented Italy from under-18 to under-21 youth levels before his debut for the senior national team in 2007. He was part of the team’s UEFA Euro 2008, 2009 FIFA Confederations Cup, and 2010 FIFA World Cup squads.

Individually, he was awarded the Serie A Goal of the Year in 2009, achieved during his time at Udinese; in 2017 and 2018 respectively, he obtained the Premio Gentleman Fairplay and the Scirea Career Award while playing for Sampdoria, which pertain to both personality and playing ability. During the 2018–19 season he scored for 11 consecutive games, a record previously achieved in Serie A only by Gabriel Batistuta; he finished the season with 26 goals in Serie A, which saw him capture the Capocannoniere title as the league’s top scorer, also being named the league’s best forward.

On 26 January 2019, Quagliarella scored two goals from penalties – his 13th and 14th league goals in the past 11 games – in a 4–0 home win over his former club Udinese, also setting up Manolo Gabbiadini’s final goal; as a result, he equalled Gabriel Batistuta’s all-time record of scoring in 11 consecutive Serie A matches in a single season, which the Argentine had set in 1994, with Fiorentina, during the 1994–95 season. With his 143rd Serie A goal, Quagliarella also overtook Christian Vieri in 28th place in the Serie A all-time goalscoring charts. By the end of the season, Quagliarella scored 26 Serie A goals for Sampdoria, achieving the Capocannoniere title. Quagliarella was named as the Serie A Best Forward and to the Serie A Team of the Year. Quagliarella was also ranked 94th in The Guardian’s list of “The 100 best footballers in the world” in 2019.