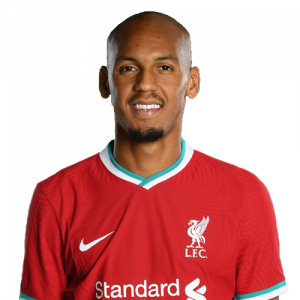 Fábio Henrique Tavares (born 23 October 1993), known as Fabinho, is a Brazilian professional footballer who plays for Premier League club Liverpool and the Brazil national team. A versatile player who mainly plays as a defensive midfielder, Fabinho can also be deployed as a right-back or centre-back.

After starting off at Fluminense, he transferred to Rio Ave in 2012. He spent his entire time there out on loan, first at Real Madrid Castilla, and made one substitute appearance for the first team. He spent five years at Monaco, playing 233 total games and scoring 31 goals, and won Ligue 1 in 2016–17. In his debut season at Liverpool he won the UEFA Champions League. He won the UEFA Super Cup in 2019 and also played a key role in guiding Liverpool to the Premier League title in 2020, the club’s first league title in 30 years.

Fabinho made his international debut for Brazil in 2015, and was part of their squads at the Copa América in 2015 and 2016.