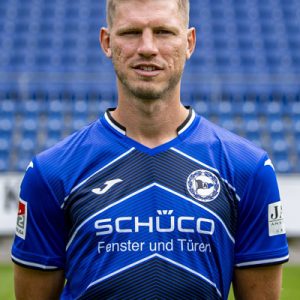 Fabian Klos (born 2 December 1987) is a German footballer who plays as a striker for Arminia Bielefeld. He is also the current captain of the team.

Born in Gifhorn, Klos was a prolific goalscorer in amateur football in Lower Saxony.

In 2009, he joined VfL Wolfsburg II spending two years in the Regionalliga Nord.

In 2011, he signed for Arminia Bielefeld of the 3. Liga alongside team-mate Maximilian Ahlschwede, and made his debut on the opening day of the 2011–12 season, as a substitute for Johannes Rahn in a 2–1 defeat against VfB Stuttgart II. He scored 10 goals in his first season with Bielefeld, and was named as 3. Liga player of the year. He scored 20 goals in the 2012–13 season, finishing as joint top-scorer of the 3. Liga, along with Chemnitzer FC’s Anton Fink, as Bielefeld were promoted to the 2. Bundesliga as runners-up.