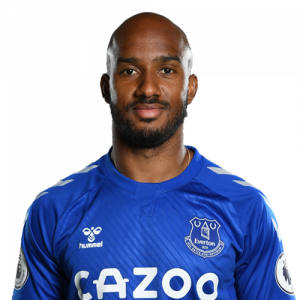 Fabian Delph (born 21 November 1989) is an English professional footballer who plays as a central midfielder for Premier League club Everton and the England national team.

He was on the books of Bradford City as a youngster until he moved to Leeds United aged 11. Having played 45 matches for Leeds at League One level and once in the Championship, he transferred to Premier League club Aston Villa in August 2009 for £6 million. In 2012, he returned to Leeds for a short loan spell. Delph had a successful start to the 2012–13 Premier League season, leading Villa manager Paul Lambert to call for his inclusion in the England squad. In July 2015, Delph joined Manchester City for £8 million.

Delph represented England at under-19 and under-21 level and made his senior debut in a friendly against Norway on 3 September 2014.

Delph signed for City’s Premier League rivals Everton on 15 July 2019 on a three-year contract for an initial fee of £8.5 million, rising to £10 million in add-ons.

In March 2008, Delph started his international career, making his debut as a substitute for the England national under-19 team.

On 28 August 2014, Delph was named in the senior England squad for the first time, ahead of a friendly against Norway and the first Euro 2016 qualifier against Switzerland. He made his international debut in the friendly against Norway on 3 September 2014, coming on as a 69th-minute substitute for Alex Oxlade-Chamberlain as England won 1–0. Five days later, in England’s first match of UEFA Euro 2016 qualification, Delph made his first start and played the entirety of a 2–0 victory away to Switzerland at St. Jakob-Park, Basel. On 16 May 2016, Delph was announced to have been selected for the provisional UEFA Euro 2016 England squad. However, on 26 May he was ruled out of the tournament with a groin injury.

Delph was named in the 23-man squad for the 2018 FIFA World Cup. He made his World Cup debut against Panama, coming on as a 63rd-minute substitute in a 6–1 win. He played the full 90 minutes of the final group game, against Belgium.

Prior to his competitive debut for England, Delph was also eligible to represent Guyana through his ancestry.