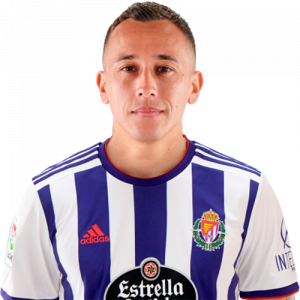 Fabián Ariel Orellana Valenzuela (born 27 January 1986) is a Chilean professional footballer who plays as a winger for Spanish club Real Valladolid and the Chilean national team.

After starting out at Audax Italiano, he went on to spend his professional career in Spain, where he represented Xerez, Granada, Celta, Valencia and Eibar. Over nine seasons, he amassed La Liga totals of 258 games and 36 goals with all the clubs.

A Chilean international since 2008, Orellana appeared in two World Cups and the Copa América Centenario, winning the latter tournament.

Born in Santiago, Orellana began his career in Colo-Colo and then moved to Audax Italiano. He made his Primera División debut at only 18, and scored 12 league goals in 38 games in the 2007 season as his team finished third in the Apertura, won their Clausura group and reached the semi-finals in the play-offs.

Orellana signed with Udinese in Italy on 23 May 2009, for €3.2 million, being immediately loaned to Xerez CD in the Spanish Segunda División. In the following campaign he continued in that country and tier, joining Granada also in a temporary deal and being a solid contributor as the Andalusians returned to La Liga after a 35-year absence, netting seven goals – plus one in the play-offs– in 2,673 minutes of play (he was also sent off three times).

In the middle of 2011, Orellana became the property of Granada. In September he was loaned to another Spanish second level club, Celta de Vigo.

Orellana was acquired for good by the Galicians in early January 2013. On 5 April 2015, he was sent off in the dying minutes of a 1–0 home loss to Barcelona for throwing a piece of turf at Sergio Busquets’ face.

On 31 January 2017, after a serious run-in with manager Eduardo Berizzo, Orellana signed a four-month loan with fellow league side Valencia, with the possibility of making the move permanent until June 2018 at the end of the campaign.

After this happened, Orellana was completely ostracised by new manager Marcelino García Toral, and on 1 December 2017 he moved to Eibar also of the Spanish top tier on loan until the following 30 June. The following April, immediately after the Basques confirmed their survival, a permanent €2 million contract was agreed after the pertinent clause was triggered; he scored eight goals in 2019–20 and also provided more assists than anyone in the squad, as they again managed to stay afloat.

On 20 July 2020, Real Valladolid announced Orellana had joined them on a two-year deal.