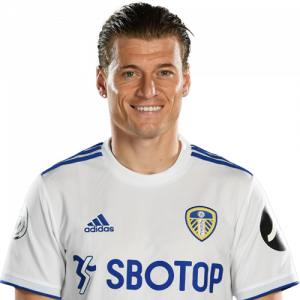 Ezgjan Alioski (born 12 February 1992) is a Macedonian professional footballer who plays as a winger or wing-back for Premier League club Leeds United and the North Macedonia national team. He is commonly known as ‘Gjanni’.

A versatile left-footed player, he predominantly plays on the left wing, and can also play as striker, attacking midfielder, right wing, left wing-back or as a left-back.

Early career
Having joined their youth academy in 2003, Alioski began his career as a left-back in the second team of Young Boys from 2010 to 2013, where he scored four goals in 57 matches. In January 2013, he went to Schaffhausen on loan, before joining on a permanent transfer in October 2013, scoring four goals in 77 matches.

Lugano
He joined Lugano on loan in January 2016, and made his debut on 13 February in a 2–1 loss against Thun. Despite signing him as a left back, then Lugano manager Zdeněk Zeman converted Alioski into an attacking right winger and striker towards the end of the 2015–16 season. He scored his first goal for the club on 11 May 2016 in a 4–0 win to Zürich.

In June 2016, his move was made permanent. New manager Andrea Manzo continued to play Alioski in the attacking roles once the season started. He scored his first goal of the campaign in his second game on 30 July 2016, in a 2–1 win over Young Boys. He scored seven goals in his first ten games at the club. On 19 April 2017, Alioski scored a hat-trick for Lugano in a 4–2 victory against Sion.

He continued to impress during his first season and helped guide Lugano to a third-place finish in the Swiss Super League. He scored 16 goals in 34 games for Lugano and was the third top goalscorer in the league in the 2016–17 season, behind Seydou Doumbia (20) and Guillaume Hoarau (18). He was also the third highest in the division in terms of his assists, after making 14 in his 34 games, behind Yoric Ravet (17) and Matteo Tosetti (15).

Leeds United
Alioski has been a part of Leeds United’s return to the Premier League in 2019–20 after a sixteen year wait, notwithstanding two seasons played in the third tier of English football. He scored important goals in the 2019–20 season. His playing style has been compared to that of Billy Bremner.

2017–18 season
Alioski joined English club Leeds United on 13 July 2017. On 6 August 2017, he made his debut in a 3–2 victory against Bolton Wanderers and created the assist for teammate Chris Wood’s goal. After gaining another assist, he received the man of the match award over Sunderland in a 2–0 win on 19 August. On 26 August, Alioski received the man of the match award and scored his first goal for Leeds in a 2–0 victory to Nottingham Forest. On 15 September, Alioski won the Championship Goal of the Month Award for August for his goal against Nottingham. In November 2017, Alioski scored in all of Leeds United’s four games, and was awarded with the club’s award for Player of the Month.

On 16 April 2018, Alioski was nominated as one of four players for Leeds United’s Player of The Year award. On 21 April, Alioski scored the winner with his seventh goal of the season in a 2–1 victory for Leeds in the Yorkshire derby against Barnsley. He ended the season with seven goals and five assists.

On 5 May, Alioski won the Goal of the Season award for his strike over Nottingham Forest at Leeds’ annual award ceremony.

Alioski started the season for Leeds as a winger playing on the right or left side, but after an injury to regular left-back Barry Douglas in 2019, Alioski was praised for his form playing at left-back, with his form keeping a returning Douglas out of the side. He continued to thrive in this wing-back position throughout 2019, producing marauding runs up the left flank and scoring against Stoke City, Bolton Wanderers and West Bromwich Albion to bring his Championship tally for 2018–19 to seven, until, on 22 April, in Leeds’ 2–0 defeat at Brentford, Alioski was substituted after twelve minutes with a torn meniscus and missed the remainder of the season, including play-offs.

During the 2018–19 season, Alioski played 47 games in all competitions, netting seven goals, after Leeds finished the regular season in third place after dropping out of the automatic promotion places with three games left following a loss to Wigan Athletic on 19 April. Leeds United qualified for the play-offs versus sixth-placed Derby County, with Alioski’s season already ended by injury. Leeds won the first leg of the play-offs in a 1–0 win at Pride Park to bring into a 1–0 aggregate lead into the home leg at Elland Road. However, they lost the second leg 2–4, with Gaetano Berardi being sent off. This setback resulted in Leeds losing 4–3 on aggregate.

2019–20 season
On 24 August, Alioski scored his first goal of the 2019–20 season in a 3–0 win over Stoke City. After the English professional football season was paused in March 2020 due to the COVID-19 pandemic, the season was resumed during June, where Alioski earned promotion with Leeds to the Premier League and also become the EFL Championship winners for the 2019–20 season in July following a successful resumption of the season. Alioski played an important part in the promotion, scoring important goals and changing games.

2020–21 season
Alioski played his first Premier League game on 19 September 2020, when he came on as a 70th minute substitute for Patrick Bamford in the team’s 4–3 home win over Fulham. Three days earlier, Alioski had been in the starting line-up, scoring the only goal — in added time — in Leeds’s 1–1 League Cup second round tie with Hull City (Hull went on to win 9–8 on penalties with Alioski missing his spot kick). He made his first Premier League start on 5 October 2020 against Manchester City, coming into the first eleven in place of Jack Harrison, who was ineligible to play over his parent club. On 16 December 2020, He scored his first premier league goal in the 5-2 home win against Newcastle United. Alioski scored his final goal of 2020 in a 5-0 away win over West Bromwich Albion.