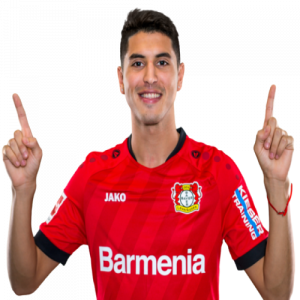 Exequiel Alejandro Palacios is an Argentine footballer who plays as a midfielder for Bayer Leverkusen and the Argentina national team.

Club career
Palacios is a youth exponent from Club Atlético River Plate. He made his league debut on 8 November 2015 against Newell’s Old Boys.

Palacios made his final appearance for his boyhood club in the final of the Copa Argentina on 13 December 2019, playing 79 minutes of a 3–0 victory over Central Córdoba.

Bayer Leverkusen
On 16 December 2019, Bayer Leverkusen announced that Palacios would join the club on 1 January 2020, signing a five-and-a-half year deal.

On 12 November 2020, Palacios fractured a bone in his spine during a 1–1 draw with Paraguay in a World Cup qualifier and was expected be out for three months. Palacios sustained the injury in an aerial duel with Angel Rmoero in the first half of the contest at La Bombonera and was replaced by Giovani Lo Celso, who took the corner from which Nicolas Gonzalez headed home Argentina’s equaliser.