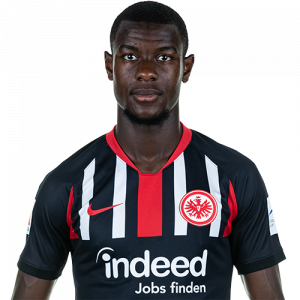 Obite Evan N’Dicka (born 20 August 1999) is a French professional footballer who plays as a defender for German club Eintracht Frankfurt and the France U21 national football team.

He is an academy graduate of Auxerre and made his senior debut for the club in January 2017, aged 17. He spent the next season-and-half at the club, making 14 senior appearances before joining Bundesliga side Eintracht in July 2018.

Auxerre
Having joined Ligue 2 side Auxerre at the age of 13, N’Dicka progressed through the club’s academy and made his professional debut on 27 January 2017, starting in a 1–0 win over Clermont. He signed his first professional contract with the club on 5 February.[2] He ultimately made 14 appearances for the club over the next season and half before signing for Bundesliga side Eintracht Frankfurt for a reported fee of €5.5m.

Eintracht Frankfurt
On 5 July 2018, N’Dicka signed for Eintracht on a five-year deal. He quickly became an important member of the first-team squad and featured regularly for the club in the league and the Europa League. In February 2019, his performances earned him the Bundesliga Rookie of the Month award, a monthly title awarded to the highest performing under-23 player in a particular month, and saw him also nominated for the Rookie of the Season award. From then, he missed only one match for the remainder of the season as the club narrowly missed out on Champions League qualification.