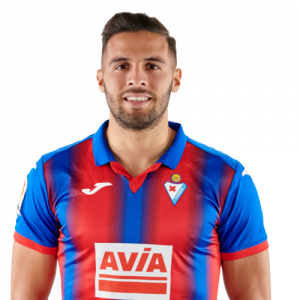 Esteban Rodrigo Burgos (born 9 January 1992) is an Argentine footballer who plays for Spanish club SD Eibar as a central defender.

Born in Salta, Burgos began his career with hometown club Gimnasia y Tiro, making his senior debut in 2011. After becoming a regular starter during the 2012–13 season, he joined Primera B Nacional side Talleres de Córdoba on 28 June 2013.

Talleres de Córdoba
Burgos made his professional debut on 14 August 2013, starting in a 1–1 home draw against Club Atlético Douglas Haig. After again being first-choice, he signed for Godoy Cruz Antonio Tomba in Primera División on 10 July of the following year.

Godoy Cruz Antonio Tomba
Burgos made his debut in the main category on 27 August 2014, starting in a 1–0 away win against Rosario Central. After featuring sparingly, he moved to the latter club on 5 January 2016, on an 18-month loan deal.

Alcorcón
On 7 July 2017 Burgos moved abroad for the first time in his career, after agreeing to a two-year deal with Segunda División side AD Alcorcón. He made his debut for the club on 19 August, starting in a 0–0 home draw against Sporting de Gijón.