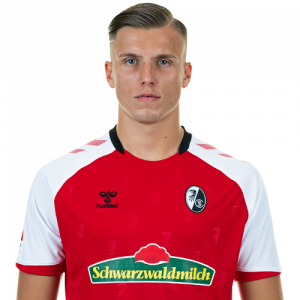 Ermedin Demirović (born 25 March 1998) is a Bosnian professional footballer who plays as a forward for Bundesliga club SC Freiburg and the Bosnia and Herzegovina national team.

Demirović started his professional career at RB Leipzig, playing mainly in its reserve team. In 2017, he joined Alavés, who loaned him to Sochaux the following year, to Almería a year later and to St. Gallen later that year. Demirović moved to SC Freiburg in 2020.

Early career
Demirović started playing football at his hometown club Hamburger SV, before joining RB Leipzig’s youth academy in the summer of 2014. He made his professional debut playing for RB Leipzig II against ZFC Meuselwitz on 13 April 2017 at the age of 19 and managed to score a goal.

Alavés and loans
On 30 May 2017, Demirović moved to Spanish side Alavés on a four-year contract. After initial problems with registration, he first played for Alavés B.

Demirović made his first-team debut in a Copa del Rey triumph over Formentera on 3 January 2018 and scored a brace. He made his league debut against Barcelona three weeks later. He scored his first league goal in a defeat of Málaga on 6 May.

On 23 July 2018, Demirović extended his contract until June 2021. The following day, he was loaned to French outfit Sochaux until the end of season.

In January 2019, he was sent on a six-month loan to Almería.

On 2 September 2019, Demirović was sent on a season-long loan to Swiss team St. Gallen.

SC Freiburg
In July 2020, Bundesliga club SC Freiburg announced Demirović would join after the conclusion of the Swiss Super League season on 3 August. Media reported the transfer fee paid to Alavés as about €4 million plus bonuses. He made his competitive debut for the club in DFB-Pokal game against Waldhof Mannheim on 13 September. Two weeks later, he made his league debut against VfL Wolfsburg. On 20 December, he scored his first goal for SC Freiburg in a victory over Hertha BSC.