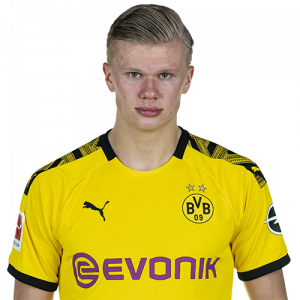 Erling Braut Haaland (born 21 July 2000) is a Norwegian professional footballer who plays as a striker for Bundesliga club Borussia Dortmund and the Norway national team.

A prolific goalscorer, Haaland is recognised for his pace, athleticism and strength, earning him the nickname, ‘The Terminator’ by many of his admirers. He also plays with high levels of confidence, utilising precise off-the-ball movement and work ethic. He is considered to be one of the best strikers in world football, as well as one of the best young footballers in the world.

Haaland started his career at his hometown club Bryne in 2016, and moved to Molde the following year; he spent two seasons with the club before signing with Austrian side Red Bull Salzburg in January 2019. At Salzburg, he won two Austrian Bundesliga titles and one Austrian Cup.

Haaland became the first teenager to score in five consecutive UEFA Champions League matches during the 2019–20 season. In December 2019, he completed a transfer to Borussia Dortmund for a fee reported to be in the region of €20 million. He carried on his goalscoring success in his Champions League campaign, becoming the second teenager to score ten goals in the competition, and won the 2020 Golden Boy award.

Following the 2019 FIFA U-20 World Cup, in which Haaland won the tournament’s Golden Boot after he scored a record nine goals in a single match, he made his debut for the Norway senior team in September 2019.

Despite being a reported target of Manchester United and Juventus, German Bundesliga club Borussia Dortmund confirmed the signing of Haaland on 29 December 2019, three days before the winter transfer window opened, for a fee reported to be in the region of €20 million, signing a four-and-a-half-year contract.