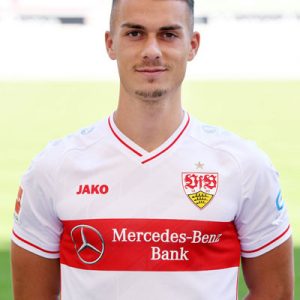 Erik Thommy (born 20 August 1994) is a German professional footballer who plays as a midfielder and winger for VfB Stuttgart.

Thommy joined FC Augsburg in 2010 from TSG Thannhausen and SSV Ulm 1846. At 16 February 2014, he made his Bundesliga debut in a 0–1 home defeat against 1. FC Nürnberg. He appeared as an 82nd-minute substitute.

In January 2015, he was loaned to 2. Bundesliga club 1. FC Kaiserslautern for a year and a half until summer 2016. However, at the occasion of announcing his loan, FC Augsburg’s general manager Stefan Reuter stated that Thommy still was a component of their future plans. Thommy was contracted with Augsburg until 2018. The loan was ended on 31 January 2016.

In the 2016 summer transfer window, he was loaned out again, this time to SSV Jahn Regensburg. He made his league debut and first start for Regensburg on 30 July 2016 in a 2–0 home victory over F.C. Hansa Rostock. He was subbed off in the 82nd minute, being replaced by Uwe Hesse.

On 18 January 2018, Thommy moved to VfB Stuttgart. His debut and first competitive start for Stuttgart came on 3 February 2018 in a 1–1 away draw against VfL Wolfsburg. He scored his first Bundesliga goal on 24 February 2018 against Eintracht Frankfurt.

On 10 July 2019, Fortuna Düsseldorf announced the signing of Thommy on loan until the end of 2019–20 season with an option to buy him permanently.