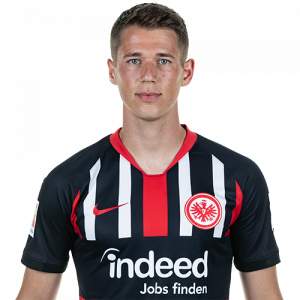 Erik Durm (born 12 May 1992) is a German professional footballer who plays as a full-back for Eintracht Frankfurt. He made his senior debut for the Germany national team in 2014, and later that year was part of their squad which won the World Cup.

In the 2013–14 Bundesliga season, Durm was inducted into Borussia Dortmund’s first team and, on 10 August 2013, debuted for BVB in the Bundesliga; coming on in the 87th minute for Robert Lewandowski as a substitute in BVB’s 4–0 win over FC Augsburg. Durm debuted in the UEFA Champions League on 1 October 2013 in a 3–0 victory over French club Olympique Marseille.

On 13 July 2018, it was announced that Durm had completed a transfer to Huddersfield Town for an undisclosed fee. Durm signed a one-year contract, with the club having the option to extend for a further year. On 3 July 2019, Durm joined Bundesliga club Eintracht Frankfurt on a four-year-contract.