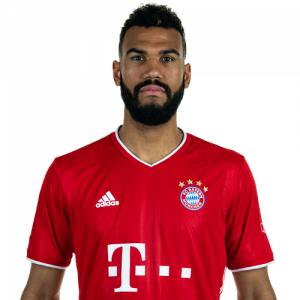 Jean-Eric Maxim Choupo-Moting (born 23 March 1989) is a Cameroonian-German professional footballer who plays as a forward for Bundesliga club Bayern Munich and the Cameroon national team.

Choupo-Moting began his career with Hamburger SV, making his Bundesliga debut in August 2007. He spent the 2009–10 season on loan at 1. FC Nürnberg and in August 2011 he joined 1. FSV Mainz 05. After three seasons with Mainz he moved on to Schalke 04 in August 2014. He became a regular for the Gelsenkirchen club, and made over 100 appearances, before joining Premier League side Stoke City in August 2017. Struggling for minutes in the EFL Championship with Stoke, he decided to move to Ligue 1 club Paris Saint-Germain on a 2-year deal in August 2018. After his contract with Paris Saint-Germain expired, Choupo-Moting joined Bundesliga club Bayern Munich in October 2020 on free transfer.

Paris Saint-Germain
On 31 August 2018, Choupo-Moting joined Ligue 1 champions Paris Saint-Germain on a free transfer. He made his debut for the club on 18 September 2018 in the 3–2 Champions League away defeat against Liverpool before scoring on his Ligue 1 debut against Rennes five days later. On 7 April 2019, Choupo-Moting made a mistake in the Ligue 1 home match against Strasbourg; when a shot from teammate Christopher Nkunku was about to cross the goal line, Choupo-Moting attempted to touch the ball with his left foot across the goal line but instead unintentionally diverted the ball onto the near post and prevented a certain goal. The BBC described it as “one of the worst misses in the history of football”.

On 25 August 2019, Choupo-Moting came off the bench to replace the injured Edinson Cavani in the 16th minute and scored twice in the second half of a 4–0 home win over Toulouse; his first goal was a superb solo goal scored after he beat four Toulouse defenders in the penalty area. On 12 August 2020, Choupo-Moting scored in the third minute of stoppage time against Atalanta in the Champions League, completing a late turnaround for PSG and sending the team into the semi-finals of the competition for the first time in 25 years. Later on, he came on as a substitute in the Champions League final, which ended in a 1–0 defeat for Paris Saint-Germain against Bayern Munich.

Bayern Munich
On 5 October 2020, Choupo-Moting joined Bayern Munich on a one-year contract. Choupo-Moting made his debut for Bayern in the first round of the DFB-Pokal on 15 October and scored twice as the club defeated fifth division side 1. FC Düren by a score of 3–0. On 9 December, he scored his first Champions League goal with Bayern Munich in a 2–0 win over Lokomotiv Moscow.