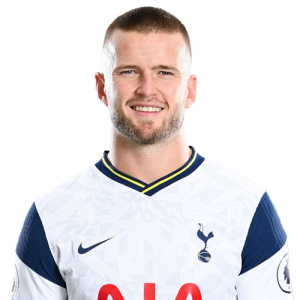 Eric Jeremy Edgar Dier (born 15 January 1994) is an English professional footballer who plays for Premier League club Tottenham Hotspur and the England national team. A versatile defensive player, Dier has been deployed as a defensive midfielder, a centre-back and a right-back.

Dier grew up in Portugal, where he came through the youth ranks at Sporting CP, making his reserve and senior debuts in 2012 after a loan to Everton. In 2014, he moved to Tottenham Hotspur on a five-year contract for a fee of £4 million. He has made over 200 appearances for Tottenham, including in the 2015 Football League Cup Final and the 2019 UEFA Champions League Final.

Despite interest from Portugal, Dier opted to represent England in international football. He made his debut for the senior team in November 2015, and was chosen for UEFA Euro 2016 and the 2018 FIFA World Cup.