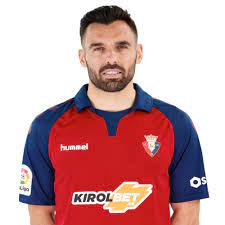 Enric Gallego Puigsech (born 12 September 1986) is a Spanish professional footballer who plays for CA Osasuna as a striker.

Early career
Born in Barcelona, Catalonia, Gallego had several working-class jobs alongside his amateur footballing career, such as lorry driver, builder and air conditioning installer. He made his senior debut with UD Buen Pastor in the 2006–07 season, in the regional leagues. In January 2009, he joined Tercera División club CE Premià after a prolific spell at Alzamora CF.

Extremadura
On 2 January 2018, Gallego joined Extremadura UD also in the third division, after the club triggered his €200,000 release clause. He scored 28 goals in total during the campaign, and achieved promotion to the Segunda División with Extremadura.

Huesca
On 16 January 2019, Gallego signed a two-and-a-half-year deal with La Liga strugglers SD Huesca, for a rumoured fee of €2 million. Three days later, he made his debut in the league, starting in a 0–3 home loss against Atlético Madrid.

Getafe
On 8 July 2019, Gallego agreed to a three-year contract with Getafe CF after his €6 million release clause was met. He made his debut for the club on 18 August, playing 11 minutes in a 0–1 defeat at Atlético Madrid.

Osasuna
On 28 January 2020, after being rarely used, Gallego was loaned to fellow league team CA Osasuna with an obligatory buyout clause if the team avoid relegation. In July, after this was achieved, he signed a permanent contract until 2022 for a €2 million fee.