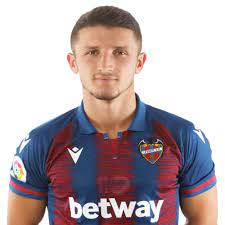 Enis Bardhi (born 2 July 1995) is a Macedonian professional footballer who plays as an attacking midfielder for Spanish club Levante and the North Macedonia national team.

Early career
Born in Skopje, to an Albanian father and a Kosovan mother. Enis Bardhi started his early career at Skupi F.C and later on he became part of K.F Albarsa where he would go on to play two seasons for the first team at the 3rd Macedonian division by showing a tremendous talent and after successful years there Bardhi joined Brøndby IF’s youth setup in 2013, from FK Shkupi. In November of that year, however, he agreed to a one-year deal with Swedish Football Division 2 club KSF Prespa Birlik.

Bardhi played ten matches and scored five goals for the club during his spell, helping in their narrow escape from relegation.

Újpest
In August 2014, Bardhi moved to Hungarian Nemzeti Bajnokság I club Ujpest on trial, and signed a three-year contract late in the month.

Levante
On 17 July 2017, Bardhi agreed to a three-year deal with La Liga side Levante UD for an estimated €1.5 million. He made his La Liga debut on 21 August, starting in a 1–0 home win against Villarreal CF.

On 26 August 2017 Bardhi scored his first goal in the top tier, netting his team’s first through a direct free kick in a 2–2 home draw against Deportivo de La Coruña.