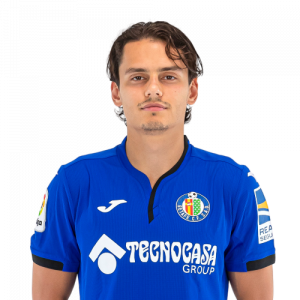 Enes Ünal (born 10 May 1997) is a Turkish professional footballer who plays as a striker for Spanish club Getafe and the Turkey national team.

Ünal scored on his Süper Lig debut on 25 August 2013 for Bursaspor against Galatasaray, making him the youngest player to net in Turkey’s top division. An international at several youth levels, he earned his first senior cap on 31 March 2015 in a friendly against Luxembourg.

Bursaspor
Ünal was born in Osmangazi in Bursa, and was promoted from the Bursaspor youth team. He made his professional debut against FK Vojvodina in the first leg of third qualifying round of 2013–14 UEFA Europa League on 1 August 2013, replacing Sebastián Pinto for the last five minutes of a 2–2 draw at Karađorđe.

Manchester City
On 7 July 2015, English Premier League club Manchester City announced Ünal’s signing for a reported fee of £2 million, their first purchase of the summer. He made his debut against Adelaide United on a tour of Australia, in a 2–0 win.

Villarreal
On 30 May 2017, Ünal joined La Liga side Villarreal for £12 million with a buy back option for Manchester City. He made his debut in the season opener, a 1–0 loss to Levante on 21 August. His first goal came on 10 September in a 3–1 win over Real Betis.

Getafe
On 12 August 2020, Getafe announced the signing of Ünal from Villarreal on a five-year contract.