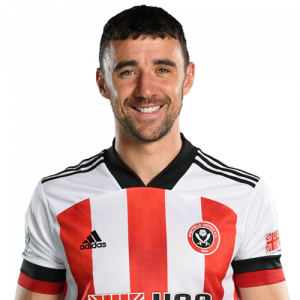 Enda John Stevens (born 9 July 1990) is an Irish professional footballer who plays as a left back for Premier League club Sheffield United.

Stevens started his career at UCD. He has experience of football at a continental level, having played in the UEFA Europa League for Shamrock Rovers.

Stevens joined Sheffield United in May 2017. On 28 April 2019 Stevens gained promotion with United to the Premier League. In March 2020, Stevens signed a contract extension that see him remain at Sheffield United until 2023.

He was joint-highest assist provider for Sheffield United in the 2019/20 season along with Lys Mousset on 4 assists.
Stevens made his Republic of Ireland U21 debut in a friendly in Cyprus in February 2011.