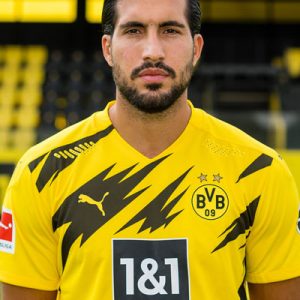 Emre Can (born 12 January 1994) is a German professional footballer who plays as a central midfielder for Borussia Dortmund and the Germany national team. A versatile player, Can has also played as a defensive midfielder, centre back and full back.

He began his senior career at Bayern Munich, playing mostly in the club’s reserve side before transferring to Bayer Leverkusen in 2013. A season later, he was signed by Liverpool for £9.75 million where he made over 150 appearances across all competitions before joining Juventus in 2018. In 2020 he joined Borussia Dortmund, initially on a loan before moving on a permanent deal a few weeks later.

Can represented Germany from Under-15 to Under-21 level, and featured at the 2015 Under-21 European Championship. He made his senior debut in September 2015 and was selected for the 2016 European Championship. The following year, he was part of the German squad which won the 2017 FIFA Confederations Cup in Russia, and also scored his first senior international goal.

Borussia Dortmund
On 31 January 2020, Borussia Dortmund announced Can’s signing on loan until the end of the 2019–20 season, with an obligation to buy. On 8 February, Can made his debut for Dortmund, also scoring a goal in a 4–3 away loss to Bayer Leverkusen. On 18 February 2020, the deal was made permanent on a four-year contract for €25 million, with the loan still expiring at the end of the 2019–20 season.