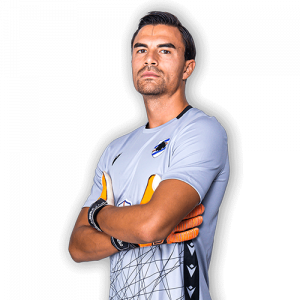 Emilio Audero Mulyadi (born 18 January 1997) is a professional footballer who plays as a goalkeeper for Serie A club Sampdoria. Born in Indonesia, he is a former youth international player for Italy, reaching the under-21 level. He is eligible to play for both Italy and Indonesia internationally.

Juventus
Youth career
Audero joined the Juventus youth system in 2008, at the age of 11, after being noticed by Michelangelo Rampulla. With the Primavera side, he reached the final of the 2015–16 Campionato Nazionale Primavera under manager Fabio Grosso, only to lose out 7–6 on penalties to Roma, following a 1–1 draw.

Senior career
Audero was first called up to the Juventus first team by manager Massimiliano Allegri on 30 November 2014, but remained on the bench in Juventus’s 2–1 home win over cross-city rivals Torino; he was called up to the bench five more times throughout the 2014–15 season. The following season, he signed his first professional contract with the club once he turned 18, and was even included in the team’s UEFA list; he was called up to the first team on 18 occasions in total, but once again failed to make an appearance for the club.

Following the departure of Rubinho in 2016, Audero was promoted to the club’s third-choice goalkeeper behind Gianluigi Buffon and Neto for the 2016–17 season. After 61 call-ups in the league, Audero made his professional debut with Juventus on 27 May 2017, at the age of 20, in the final match of the 2016–17 Serie A season, a 2–1 away victory over Bologna.

Sampdoria
On 17 July 2018, Audero signed for Serie A club Sampdoria on loan until 30 June 2019 with an option to buy. On 26 February 2019, Sampdoria signed Audero on a permanent transfer in a deal worth €20 million.