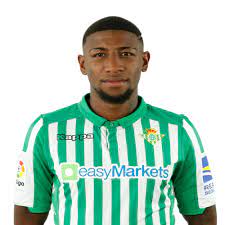 He will rejoin his parent club Barcelona from 1 July 2021, after his loan spell ends.

Ponte Preta
Emerson joined Ponte Preta’s youth setup in 2015, after notably representing Palmeiras, São Paulo and Grêmio. After appearing as an unused substitute in some matches of the 2016 Campeonato Brasileiro Série A, he made his senior debut on 22 February 2017, replacing injured Artur in a 2–2 Campeonato Paulista away draw against Linense. Despite being booked and committing a penalty, he was given his first start three days later, in a 1–0 home defeat of São Bernardo.

Emerson made his Série A debut on 5 November 2017, replacing injured John Kleber in a 2–0 loss at Bahia. He contributed with three league appearances during the campaign, as his side suffered relegation.

Promoted to the first team ahead of the 2018 season, Emerson became a regular starter for Macaca, making 14 appearances in the 2018 Campeonato Paulista. On 2 April 2018, he scored his first professional goal, the winning one in the Campeonato Paulista do Interior final against Mirassol.

Atlético Mineiro
On 27 April 2018, Emerson signed a five-year deal with Atlético Mineiro, for a rumoured fee of R$ 5 million. As a part of the deal, Danilo Barcelos moved in the opposite direction on loan.

Emerson made his debut for the club on 19 May 2018, playing the full 90 minutes in a 1–0 win over rivals Cruzeiro. Initially a backup to Patric, he ended the year with 23 league appearances. He scored his first goal in the top tier on 30 September, netting his team’s third in a 5–2 home routing of Sport.

Real Betis
On 31 January 2019, Atlético announced the transfer of Emerson to FC Barcelona, effective as of July 2019, for €12.7 million. The deal consisted of a joint financial operation between Barcelona and fellow La Liga side Real Betis, in which each club paid half of the transfer fee and retained a percentage of Emerson’s economic rights. He was to become a Betis player in July 2019, with Barcelona holding the option of reacquiring him for €6 million in 2021. He initially joined Betis on loan from Atlético for the remainder of the 2018–19 season, during which period he made seven appearances for the club, and also on loan from Barcelona for 2-year long season.

Barcelona
On 2 June 2021, Barcelona exercised their option to bring back Emerson for three seasons, who spent two-and-half seasons on loan at Real Betis. Barcelona paid €9 million for this transfer, as he would join the club from 1 July.