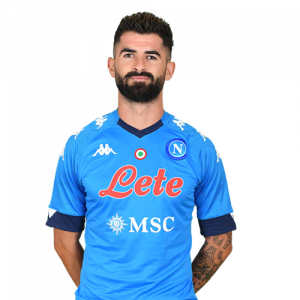 Elseid Gëzim Hysaj (born 2 February 1994) is an Albanian professional footballer who plays as a right-back for Italian club Napoli and the Albania national team, for which he is captain. Hysaj can operate on both sides of the pitch as a full-back.

In July 2015, Hysaj concluded a deal with the fellow Serie A side Napoli, following former Empoli coach Maurizio Sarri and player Mirko Valdifiori to the club. On 3 August 2015, Hysaj completed his transfer at Napoli and signed on a five-year contract for a reported fee of €5 million, becoming the second most expensive move involving Albanian international players behind of Lorik Cana which currently holds the record with a €6.75 million move from Galatasaray to Lazio in July 2011.

2015–16 season
He made his competitive with the club on 23 August 2015 in the opening league match against Sassuolo, which finished in a 2–1 away defeat. He showed an impressive form at the club to become a regular starter under the coach Maurizio Sarri and also playing the entire 90-minute matches, substituting off in just a few cases and leaving behind the Italian international Christian Maggio.

Hysaj made his European debut on 17 September 2015 in the Europa League group stage match against Club Brugge, which ended in a 5–0 home win. Napoli finished the Group D in the first place by winning all matches, and was drawn to play Villarreal in the Round of 32.

On 8 February 2016 Hysaj was included in the best 11 of Serie A youth players by football analyst Gianluca Di Marzio among big names such as Juventus players, Paul Pogba, Paulo Dybala, Inter Milan player Mauro Icardi and Milan player M’Baye Niang. Calciomercato selected Hysaj as the best right-back in Serie A.

2016–17 season
He was ranked third at Napoli for most minutes played during the entire season including all competitions. In the end of the season his value went €18 million becoming the most valuable player of Albania national team.

2017–18 season
Hysaj made his 100th appearance in all competitions for Napoli on 21 October 2017 in the goalless home draw against Internazionale valid for the matchday 9 of 2017–18 Serie A.

2018–19 season
Chelsea made a bid for Hysaj in the summer of 2018 for £43 million. However, Hysaj’s agent valued him at €60 million. Hysaj was considered at the time one of the best players in his position in the world.