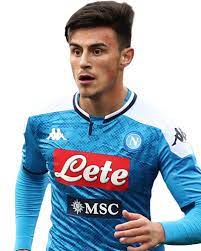 Eljif Elmas (born 24 September 1999) is a Macedonian professional footballer who plays for Serie A club Napoli and the North Macedonia national team as a midfielder.

Early career
Elmas started his career at FK Rabotnički in his native Macedonia. After a stand-out season in which he scored 6 leagues goals and lead Rabotnički to a third place finish in the Macedonian First Football League in 2016–17, he joined Turkish giants Fenerbahçe on a deal until 2022, with Fenerbahçe paying the former €300,000 for his services. The attacking midfielder went onto score four goals in over 40 appearances for the Yellow Canaries in all competitions before moving to Italy in July 2019.

Napoli
On 24 July 2019, Serie A side S.S.C. Napoli announced the signing of Elmas from Fenerbahçe. The deal was worth a reported €16m, which could rise to €19m in total with bonuses – including a €1.5m sell-on fee clause. He was disciplined by his new club after speaking to reporters while away on international duty in November 2019 for breaching a club media blackout.

Elmas scored his first Napoli goal on 3 February 2020 to help the club to a 4–2 victory over Sampdoria, and secure their third win in a row in all competitions.

International career
Elmas was born in Macedonia to a family of Turkish descent. In July 2017 it was reported the coach of the Turkey national football team, Fatih Terim, had tried to call him up, but Elmas decided to represent his birth country.

On 11 June 2017, at the age of 17, Elmas made his debut for the Macedonia national team in a FIFA World Cup qualifier against Spain by coming in at halftime as a substitute for Ostoja Stjepanović.

Elmas was also included in the Macedonia U21 squad for the 2017 UEFA European Under-21 Championship in Poland, and he was in fact the youngest one in the 23 players squad.

On 31 March 2021, he scored the winning goal for Macedonia in a 2–1 away win over Germany during the 2022 FIFA World Cup qualification.