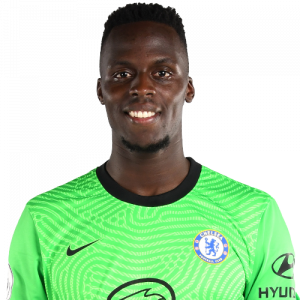 Édouard Osoque Mendy (born 1 March 1992) is a professional footballer who plays as a goalkeeper for Premier League club Chelsea and the Senegal national team. Born in France, he represents Senegal at international level. Mendy was born in Montivilliers, Seine-Maritime.

On 24 September 2020, Chelsea announced they had signed Mendy on a five-year contract for a fee reported to be £22 million. Chelsea head coach Frank Lampard revealed that former Chelsea goalkeeper and current Technical Advisor, Petr Čech (who coincidentally also joined Chelsea from Rennes), played a prominent role in the decision to sign Mendy. On 29 September 2020, Mendy made his debut for the club against Tottenham Hotspur in the fourth round of the EFL Cup, which Chelsea lost 5–4 on penalties after a 1–1 draw. Mendy made his Premier League debut on 3 October, keeping a clean sheet in Chelsea’s 4–0 victory over Crystal Palace. His clean sheet against Burnley on 31 October made him the first Chelsea goalkeeper to keep a clean sheet in their first three Premier League matches since Petr Čech in 2004. With a clean sheet in the club’s next match, a 3–0 win against Mendy’s former club Rennes in the Champions League, Chelsea recorded five consecutive shutouts for the first time in a decade.